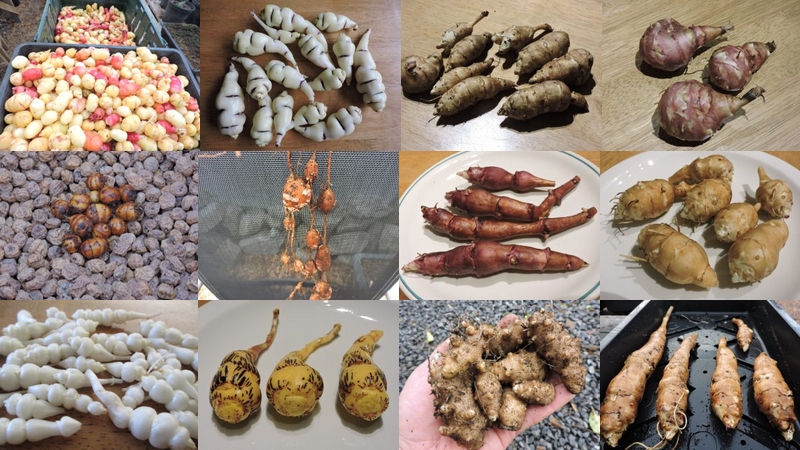 Ideal starter kit for anyone looking to grow ancient edible tubers, a most rewarding crop for years to come. Vigorous tubers are freshly harvested and posted unwashed for extra preservation. More information and videos below. Free postage on additional items!

Jerusalem Artichoke, also known as Sunchoke or Sunroot. It’s a member of the sunflower family and it was first introduced into Europe at the beginning of the 18th century. It is a versatile and useful plant with it’s many uses beyond being ornamental. Plants reach 3 meters (10 feet) in height very quickly, this makes them ideal for a pop up hedge or a wind breaker for the summer months. Tubers are plentiful and can overwinter outside in any well mulched garden protecting them from frosts. They do particularly well in no dig lasagne gardens and can even be harvested throughout the winter or left to grow in the next growing season. Sunroots are famous for it’s edible tubers which are often referred to as earth apple. Although it’s best to wait until the carbohydrates have turned from inulin into fructose later in the winter, this makes it sweeter to taste and easier to digest.

Oca is easy to grow and requires no maintenance. Beautiful Ornamental plants and edible tubers! It is frost sensitive, but has no pest or blight issues at all. The Oca Rainbow Mix includes at least 5 varieties mixed up. Oca are healthy and tasty, a valuable source for vitamin C, B6, A, potassium and iron. It was first introduced to Europe in the 1830’s to compete with the potato, it never became popular and the potato ended up on almost every Europeans dinner plate for nearly 200 years. Oca is quite rare nowadays, perhaps it’s not suitable for commercial production, however it is a good vegetable for the domestic garden. Lets make it popular again! It can be cooked in much the same ways as potatoes, our favorite way is to roast them in the oven with some oil, salt and pepper.

Tiger Nuts, also known as Chufa is a hardy perennial producing a generous deposit of delicious starchy tubers commonly known as tiger nuts or earth almonds. These can be eaten fresh or dried for long term storage. Tiger nuts were the primary source of food for our Paleolithic ancestors 2 million years ago and they are among the oldest cultivated vegetables dating back to 16000 BC in Egypt. The nuts grow underground and can easily be made into a beverage called tiger milk by blending them with some water and sugar. Ideal plant for a perennial vegetable garden or a forest garden as it will grow year after year with almost no maintenance. Tiger nuts are dried for storage, please soak for 24 hours before planting. Please note they are frost sensitive, so they are best planted out after chances of a hard frost have passed. You could start them early in trays or pots in a greenhouse in April or May to give them a head start.

Mashua is a tuberous Nasturtium, extremely hardy and well suited to our cold temperate maritime climate in Ireland. It has been used by humans for 8000 years and has been in cultivation for about 1400 years in Peru and Bolivia at over 3000 meters above sea level. The whole plant is edible. The leaves and flowers are great in salads and not as spicy as nasturtium although a similar flavour. The tubers are spicy and best grated into a salad or roasted whole in the oven. In spring, when it’s still cold and not much else is growing, mashua takes off to an early start and it almost takes over the place with it’s climbing shoots. In fall it flowers and retracts back into fresh tuberous stored underground for the winter well protected from the frost. No artificial storage and replanting required, same as the potato and the oca when using wood chip mulch. In our gardens they have been coming back year after year more vigorous. The Latin name is: (Tropaeolum tuberosum)

Apios americana was also known as travelers delight and groundnut. It’s a perennial plant with tubers growing underground linked like sausage chain. It’s a climber with beautiful pink and purple flowers. We have achieved much better yields by growing them indoors in a greenhouse. In cold temperate climates the stems and foliage dies back completely in the winter once temperatures below frost are reached. All it’s energy is stored safely underground in the tubers until it gets warmer again in spring time. If planted in a well mulched garden it doesn’t need to be taken up for the winter and stored indoors, as the mulch will protect the tubers from the frost. They can also be stored in a well ventilated open container filled with potting compost or peat to keep the air off the tubers. The tubers also be process into a well known Yacon syrup for sweetening deserts or tea. Each of the growing tips can grow into one large that will give you a few edible tubers and some growing tips or starts.

Chinese artichokes are a reliable cropper producing lots of small tasty tubers. It’s perennial and in the mint family so it’s best grown in containers or in a permanent location. Tubers can be eaten raw or cooked. We like to add them to salads or just snack away at them while we’re in the garden. Latin name: Stachys affinis

Madeira Vine is a frost tender perennial climber producing masses of edible leaves with a pleasant flavour, these are a really good spinach substitute. It also produces edible tubers that have a mucilaginous texture, this characteristic is lost after roasting. It’s quite ornamental with it’s thick heart shaped leaves and white flowers in autumn. Harvest video below.

There are many other rare tubers. Most of them quite similar to the well known potato but often healthier and can be grown with near zero maintenance. In our experience tubers can be stored in a well drained and mulched garden bed all winter, or in some almost dry potting compost or sand in a cold well ventilated shed. Best suited are open trays, buckets, pots or paper bags.

We like to get them off to a good start by planting them in small pot or trays in the greenhouse around March or April and plant them out into our mulched garden beds as strong seedlings in May when there is no more hard frosts. We have some videos on planting and harvesting Oca, Sunchokes and Mashua.