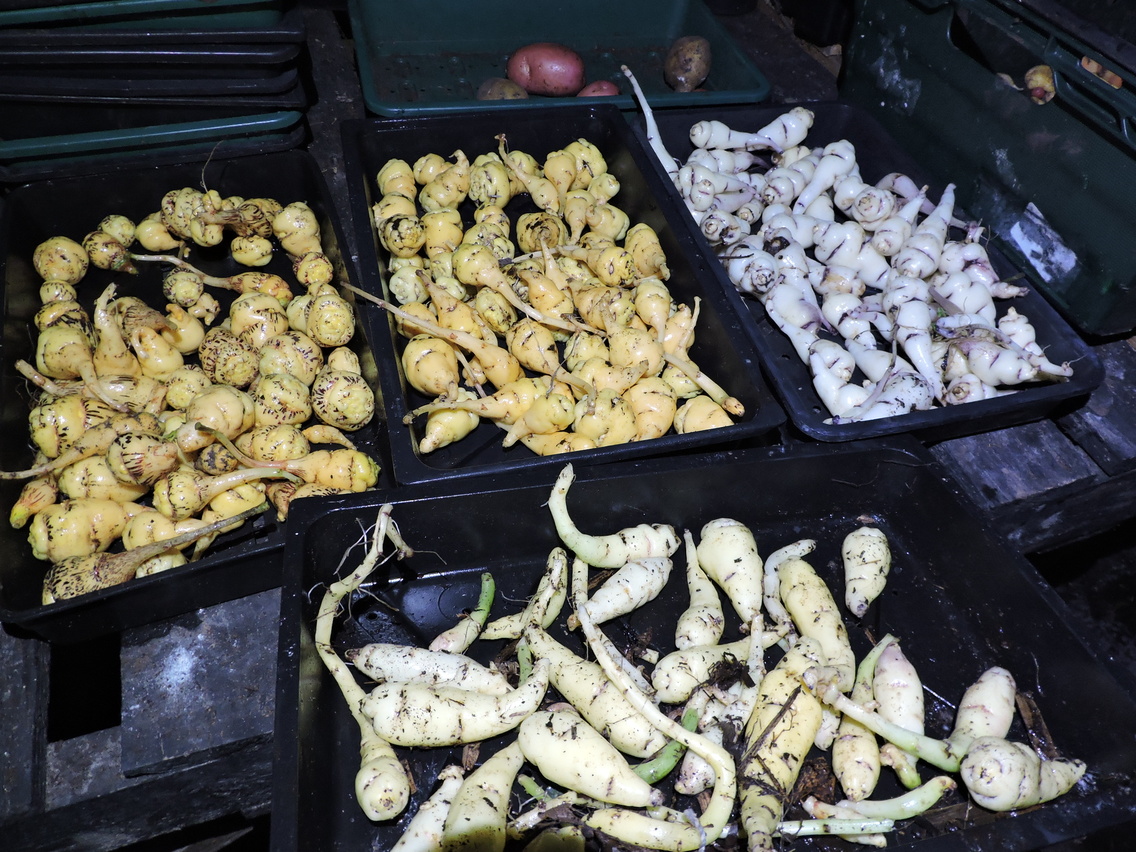 Ideal starter kit for anyone looking to grow ancient edible tubers, a most rewarding crop for years to come. Vigorous tubers are freshly harvested and posted unwashed for extra preservation. More information and videos below. Buy more get more extra free. Free postage on additional items!

TUBERS WILL BE AVAILABLE AGAIN FROM OCTOBER ONWARD. Subscribe to get updates!

Madeira Vine is a frost tender perennial climber producing masses of edible pleasantly flavoured leaves that are a really good spinach substitute. It also produces edible tubers that have a mucilaginous texture, this characteristic is lost when roasted. It’s quite ornamental with it’s thick heart shaped leaves and white flowers in autumn. We have been growing it in our greenhouse and we’ve been harvesting leaves right up to the first hard frost in early December. We planted right in the center of the greenhouse and we like to take a nibble when walking by. These plants take up a tiny amount of space whilst producing a considerable amount of food. They should do fine outdoors too, which we will try in the next growing season. It forms a ball of 3-5cm long tubers just beneath the surface of the soil which makes for easy harvesting. Harvest video below.

Jerusalem Artichoke, also known as Sunchoke or Sunroot. It’s a member of the sunflower family and it was first introduced into Europe at the beginning of the 18th century. It is a versatile and useful plant with it’s many uses beyond being ornamental. Plants reach 2.7 meters (9 feet) in height very quickly, this makes them ideal for a pop up hedge or a wind breaker for the summer months. Tubers are plentiful and can overwinter outside in any well mulched garden protecting them from frosts. They do particularly well in no dig lasagne gardens and can even be harvested throughout the winter or left to grow in the next growing season. Sunroots are famous for it’s edible tubers which are often referred to as earth apple. Although it’s best to wait until the carbohydrates have turned from inulin into fructose later in the winter, this makes it sweeter to taste and easier to digest.

Tiger Nuts, also known as Chufa is a hardy perennial producing a generous deposit of delicious starchy tubers commonly known as tiger nuts or earth almonds. These can be eaten fresh or dried for long term storage. Tiger nuts were the primary source of food for our Paleolithic ancestors 2 million years ago and they are among the oldest cultivated vegetables dating back to 16000 BC in Egypt. The nuts grow underground and can easily be made into a beverage called tiger milk by blending them with some water and sugar. Ideal plant for a perennial vegetable garden or a forest garden as it will grow year after year with almost no maintenance. Tiger nuts are dried for storage, please soak for 24 hours before planting. Please note they are frost sensitive, so they are best planted out after chances of a hard frost have passed. You could start them early in trays or pots in a greenhouse in April or May to give them a head start.

There are many other rare tubers such as Yacon, Chinese artichoke, Jerusalem artichoke, Ulluco and Apios. Most of them quite similar to the well known potato but often healthier and can be grown with near zero maintenance. In our experience tubers can be stored in a well drained and mulched garden bed all winter, or in some almost dry potting compost (or peat) in a cold well ventilated shed. Best suited are open trays, buckets, pots or paper bags.

We like to get them off to a good start by planting them in small pot or trays in the greenhouse around March or April and plant them out into our mulched garden beds as strong seedlings in May when there is no more hard frosts. We have some videos on planting and harvesting Oca, Sunchokes and Mashua.